“Capá Prieto is an effort to rescue the Afro Puerto Rican roots by bringing them back to our history; at the same time, these beautiful stories are a showcase for a culture characterize for its courage, solidarity and sacrifice.” -Alberto Martínez 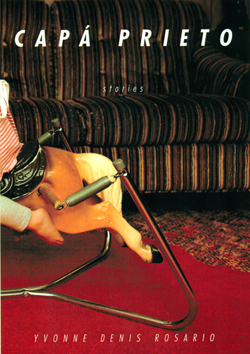 “Capá Prieto fictionalizes the Afro-Puerto Ricans experience from bondage to citizenship. Past and present are beautifully intertwined in order to expose a truthful, intense, and promising Puerto Rican negritud.”
Dr. Mamadou Badiane
University of Missouri-Columbia

Capá Prieto astonishes, among other virtues, because of the fluidity of its historical imagination which traverses from a black rebellion in 1797 in colonial Puerto Rico through to a drama about a historian from the Universidad de Sevilla, who two hundred and ten years later, in the Spanish Archives, finds documentary evidence of said event. Capá Prieto is nurtured by novel inspiring human experience in the Antillean past and present.
Dr. Silvio Torres-Saillant
Syracuse University, New York

Yvonne Denis Rosario, in combining extensive research and gifted imagination, has succeeded in creatively interweaving history and fiction in order to bring to the forefront the historically marginalized voices and experiences of Puerto Rico’s Afro-Caribbean communities. In transmitting these stories so carefully and artistically, the author highlights and explores some of the many silences that have characterized Latin America’s dominant historical and cultural traditions since the beginning of the colonial era. This work makes a truly significant contribution to the evolution of Puerto Rican, Caribbean and Latin American literary history.
Dr. Mary Lou Babineau
St. Thomas University, Canada


Yvonne Denis Rosario was born in 1967 in San Juan, Puerto Rico. Her stories have been published in various literary publications such as: Tongüas, El Cuervo, Revista Cayey, Revista Identidad and Letras Salvajes. The Instituto de Cultura Puertorriqueña (Cultural Institute of Puerto Rico) has published her poetry under the auspices of the Proyecto para el fomento del quehacer literario (Project for the Support of Literary Work). Guajana digital magazine and the Claridad newspaper have published her poetry; and, her poems were included in the Antología poética brasilera (published by Editorial Abrace) and the Antología Premio Di Poesía Giulia Gonzaga, 40 A *2009* Millenio, published in Spanish and Italian. She was invited as a poet to the First and again to the Second International Poetry Festival in Puerto Rico. Today, she continues to garner recognition for her work at various literary gatherings. Yvonne Denis Rosario is currently a Professor in the Spanish Department of the General Studies Faculty at the University of Puerto Rico, Río Piedras.